As you are all aware Disney is a big part of our lives so I think that the fact that Ethan’s first Disney fix was when he was seventeen months old is quite an achievement for me being able to wait so long!

I had returned to work at this point so when tickets were released for the show I was able to treat us. I was worried that Ethan was too young, but the fact of the matter is Disney on ice shows aren’t cheap and the fact that children under two are free because they can sit on your lap it was easier to find the money than it is now. When children reach the age of three and you have to start paying for them to gain entry to things it really does make a difference.

Darren at this point had never been to the 02 and it is somewhere he had always wanted to visit so this meant that I got a Disney fix, Darren got to finally see the 02 and we got some family time. Win, win all round!

We had picked to go to the first show on a Sunday morning which was at 11am and living roughly two hours away we were up and out early. We had decided to take the car as we find it easier to go than train and there isn’t that much difference in the cost.

We did have a very scary experience on the drive down, we laugh about it now but it could have ended really badly. As we were driving down the dual carriage way a stag jumped right out in the middle of the road. There was a car next to us and we both slammed on the brakes, the stag was missed by inches and I’m sure he even winked at us! Both the passengers in the car next to us, and Darren and I looked at each other and laughed in relief. There would have been some damage if either of the cars had hit it, I really hate that dual carriage way!

We arrived at the 02 at 9.30 am, the show didn’t start until 11 am, but as Ethan had only just started walking the month before, we thought we would be brave and leave the buggy in the car so we didn’t have to worry about leaving it anywhere. 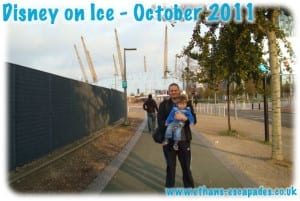 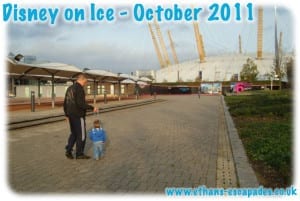 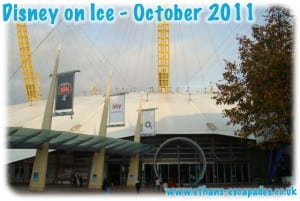 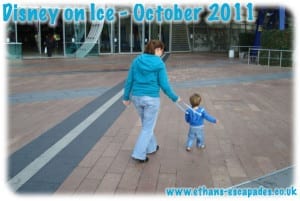 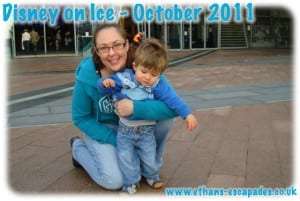 I can’t believe how small Ethan looks in these photos now!
With so much time to spare we stopped to get a coffee (hot chocolate) and have something to eat. We also had a look around the restaurant area, which really reminds me of Downtown Disney!
I really love what they have done to the 02, I visited it when it hosted the millennium exhibition and also when the Ministry of Sound hosted an all night New Years eve party there. I’m so glad they made it an entertainment complex and it’s no longer sitting there empty.
We took Ethan for a little wander around to kill some more time. 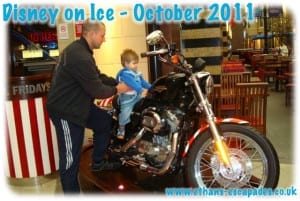 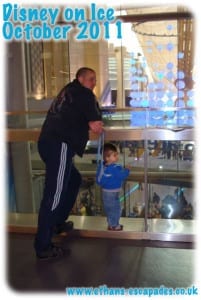 It was soon time to find our seats and we had the most amazing view. 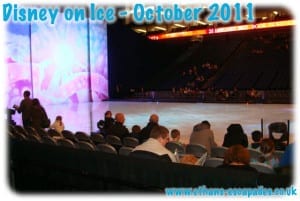 The World’s Of Fantasy show consisted of four Disney movies, Car’s, The Little Mermaid, Disney Fairies and Toy Story 3. An ice show perfect for both boys and girls.
The show was introduced by the fab four Mickey, Minnie, Donald and Goofy. 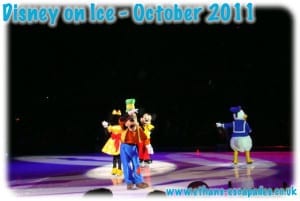 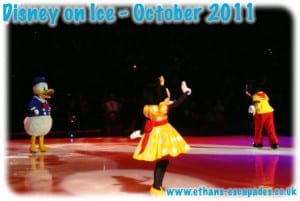 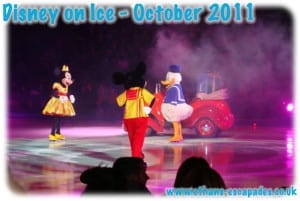 Disney’s Car’s came onto the ice next. It was amazing how the cars moved on the ice and it was very loud with the car’s racing around, we all enjoyed it. 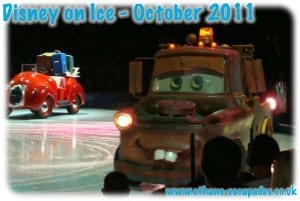 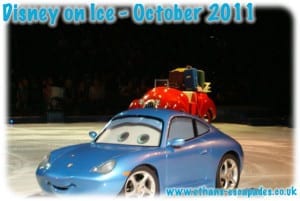 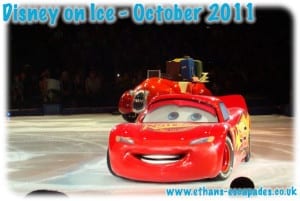 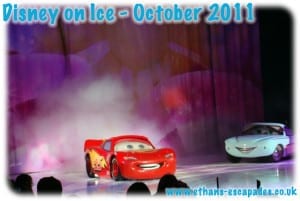 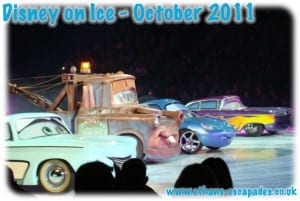 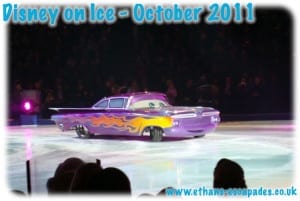 The next part of the show was The Little Mermaid, I love this as it is always so colourful. I also remember going to see this at the cinema so perhaps that is also why I have a soft spot for this Disney film. 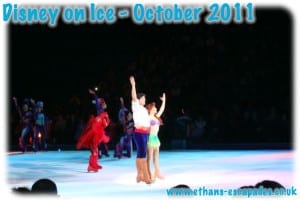 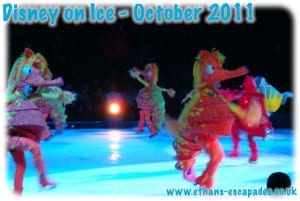 It was then time for the Disney Fairies and Tinker Bell, everyone loves Tinker Bell! I must admit we haven’t seen the films at this point but all the flowers and colours used were amazing. 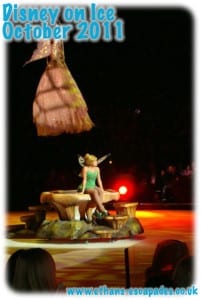 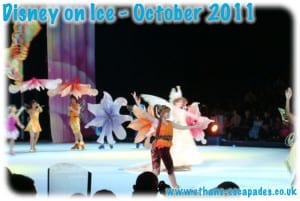 After the interval it was time for Toy Story 3, this was the longest section of the show and it told the whole story so was a little slower pace. This therefore meant that Ethan lost interest a little bit as the music wasn’t constant so he was a little fidget, but we did manage to last until the end of the show. 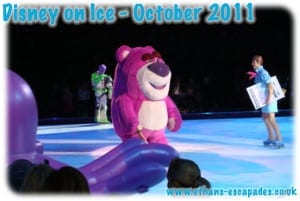 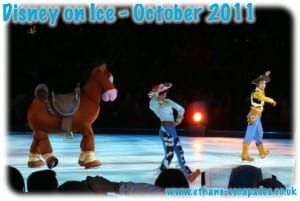 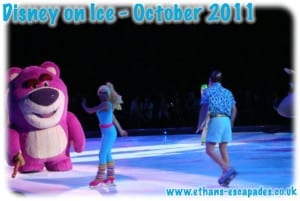 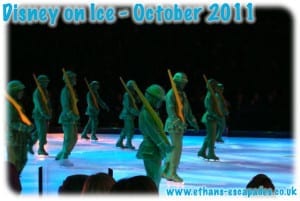 I’m glad we went to see the show and even though we were nervous about how Ethan would react to it we didn’t let that stop us from going. I was also worried that Ethan was going to be the youngest there but there was lots of small children watching the show, even babes in arms.
The only thing I would say is that the merchandise at these shows are very expensive, so if you have to buy lots of tickets and add merchandise on top it isn’t a cheap day out! 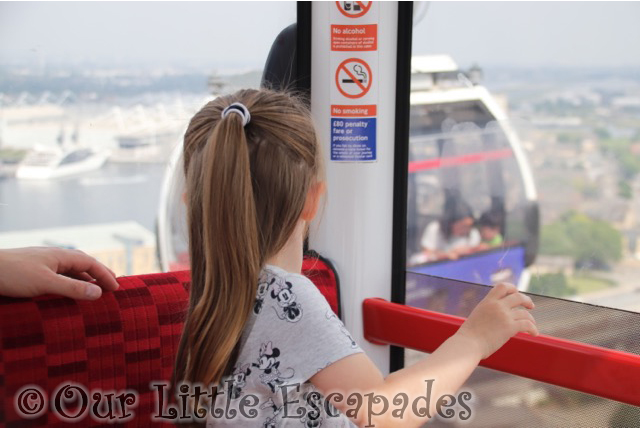 Our Trip On The Emirates Air Line 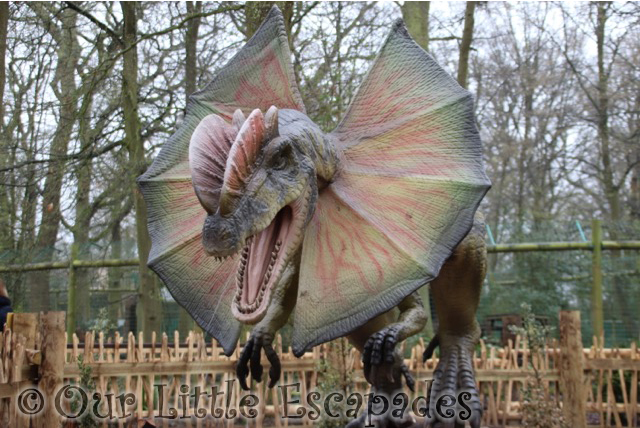 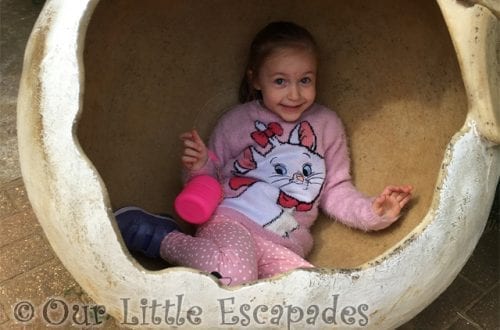 A Girly Trip To Colchester Zoo

It was a busy weekend at #disneylandparis as it wa