On our last visit with our Family Support Key Worker we needed to work on PECS with Ethan. I had realised that I was using the PECS system as more of a choice board for Ethan so we showed him again how PECS work.

Our Family Support Key Worker had brought with her some new toys which Ethan got very excited about, a caterpillar and an octopus. 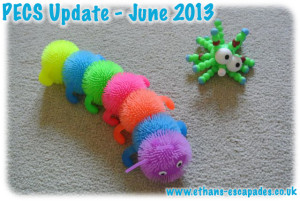 Ethan was meant to use the PECS to decide which toy he wanted out of the two, but for some reason he had connected that the two go together and was getting very distressed if we tried to keep them apart. So we broke the rules of PECS a little and let him give us both of the picture cards for both items.
Ethan had got into the habit of waiting for us to indicate when to give us a card so we also worked on this by moving his folder further away from us. This then progressed to making him travel and we spent quite a lot of the secession placing the cards on Ethan’s folder and running down the hall into the kitchen to see if Ethan would travel to ask us for something. He travelled every time and this did turn into quite a funny game with lots of laughing on all sides.

So how are we getting on after this refresher lesson?

I think Ethan is doing amazingly well and is asking me for things using PECS. Mostly it is to show me that he wants Mickey Mouse Clubhouse on the TV but a few months ago he could only drag us to the TV. Over the past week he has also shown me when he wants a snack or milk, and he has just asked me for his trains which he is now using like cymbals!
I’m so pleased that Ethan now has a choice over which snacks he has as before it was all guesswork.
I do have a lot more PECS cards to make so that Ethan can have even more of a choice but I need to fix our printer first and I’m waiting for a new print head to be delivered!
I’m likning this post to Post, Comment, Love 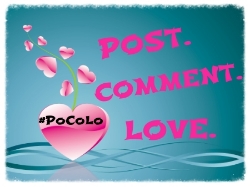