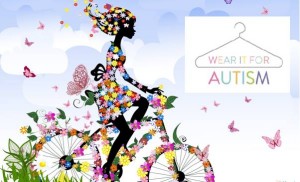 Wear It For Autism is a fashion show with a difference. All the models taking part have, in some way, been affected by autism – and all the profits will go towards improving the lives of others with the condition.
Organised by autism campaigner and mum-of-three Anna Kennedy, Wear it For Autism will see mums, dads, adults and children strutting their stuff along the catwalk, in front of friends, families, celebrities and VIPs.
As you are aware Autism is a subject very close to our hearts, and I was very happy to see the amazing Anna Kennedy at The Autism Show. I am very honoured to have been asked to help raise awareness for this fantastic charity event and I have been given two tickets to giveaway as a prize.
The fashion show takes place on the 10th of September 2013 at the Vinyl Factory in the heart of Soho, London.
Each person taking part in the event had been nominated earlier this year by a friend or family member and chosen by the judging panel, which included presenter Gail Porter, actress Adele Silva and the Principal of Pineapple Performing Arts Covent Garden, Maggie Paterson, for their dedication and selflessness.
The winners will be split into five categories; mums, dads, carers, children with autism and adults with autism. They will all be treated to a head-to-toe makeover before hitting the stage.
Tickets to the event cost £25 – which include entry and a goody bag –  and are available at www.annakennedyonline.com.
Guests will also be treated to a variety of entertainment, including acts from the hugely successful Autism’s Got Talent show.
All profits go to the registered charity Anna Kennedy Online, which supports UK families affected by autism, including providing small grants for educational and domestic resources.

Anna Kennedy said: “The idea behind Wear It For Autism was to spoil those who usually never get a chance to treat – or even think of – themselves. Living with autism can be challenging and extremely demanding, so we wanted to create a special event that will be fun for all involved, as well as raise vital funds to campaign for the rights of those with this disability.”

For the chance to win a pair of tickets, enter via the Rafflecopter below.