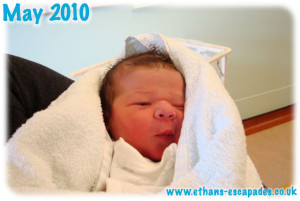 Nanny would style it for him… 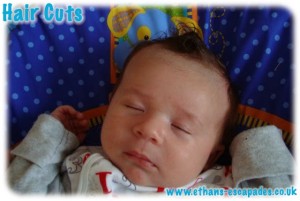 …and he had a lovely mass of curls on the top of his head that I didn’t want to loose for a while. 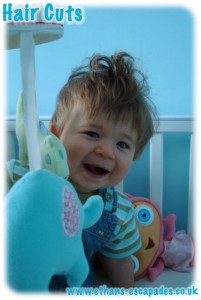 Ethan’s hair grew quickly so for the first year of his life we did lots of home hair cuts, which always didn’t turn out very well. 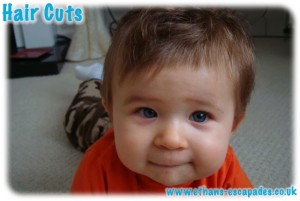 It wasn’t long before Ethan’s hair got long enough that people would ask me how old my little girl was! 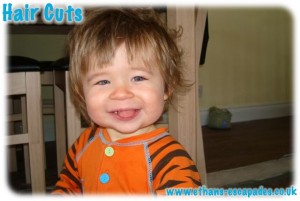 It was at that point I knew it was time to get the help of a professional so we booked him in for his first official hair cut.
It went as well as can be expected and we would return for Ethan’s trim every ten weeks. This proved to be too long and Ethan now has his hair cut every five weeks. When I found out I was expecting a boy it never occurred to me that we would be visiting a hairdressers so frequently.
Unfortunately Ethan started to cry when he was having his hair cut. He also started to cry when we arrived at the hairdressers and even tried to bolt before going in.
It took a while, but we finally worked out that Ethan didn’t like the feeling of the cut hair falling on his arms. Knowing that Ethan is hypo sensitive (under-sensitive) it never occurred to us that he could also be hypersensitive in certain areas, but I now know this is possible.
So now when Ethan has his hair cut we make sure we cover his arms with our hands, he sits on our laps to help keep him still. This has made it a positive experience for him and he now doesn’t cry as soon as he sees the hairdressers.
A very small step but one amazing achievement!