I was going to start this post saying that this August has been the most tiring than I can remember and that I feel exhausted. It is true that I’m exhausted but then I remembered that last August was our first real month as a family of four and that was very tiring too. Perhaps it’s just an August thing!

We have been very busy this month with lots of lovely days out but we still haven’t managed a true outside family photo. So here we are again with our famous sofa shot. 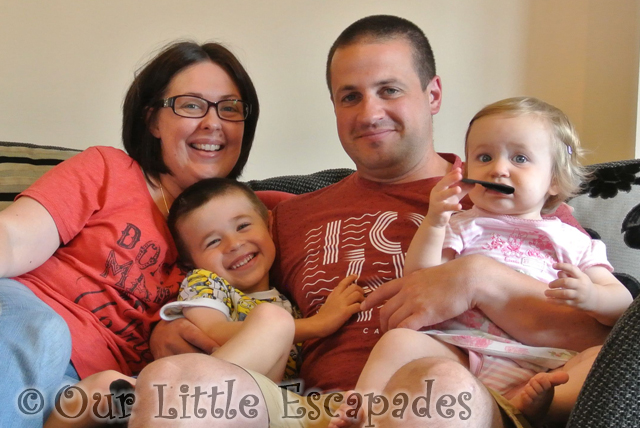 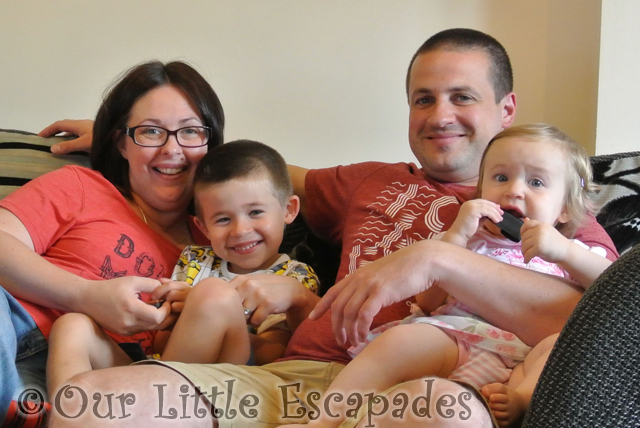 Another great thing about this photo is that there is no iPad in Ethan’s hands. This fact has also contributed to the fact that Ethan is really keeping me on my toes at the moment as he has decided that his new passion is Nick Jr Too and Peppa Pig!

If you also look very closely you will notice that Ethan has glue in his hair. Ethan will return to school with a summer holiday war wound as on Saturday night he managed to fall over in the middle of the night and hit his head on his bed. This resulted in a cut head and a lot of blood. A trip to the walk in centre to get it checked out proved that glue was needed. I can see me having to say ‘leave it alone’ every few minutes for the next five days!

August has been very busy for us and with Ethan’s lack of ‘normal’ routine we have had lots of sleepless nights too. This all has helped to feeling exhausted. We have had days out which included a trip to Hastings, a week at Haven in Great Yarmouth and on Friday we even had an unexpected day at the Clacton Air Show.

Even though Ethan had a rough start to the summer holidays I think he has enjoyed his time at home. We have also seen some new words, mostly Nick Jr Too and the names from Peppa Pig but it is fantastic progress for him. He is also trying to copy the things we say by vocalizing them in his own way.

Little E has enjoyed having her brother at home more, something she did have to get used to too. There has been some lovely interaction with them which mostly includes them running up and down the room. Seeing them laughing together is amazing. Her walking really has come on leaps and bounds and we even took her for her first official walk outside to the park last week.

It was also a big month for Little E as she had her MMR. It was something I was worried about but know it’s something that needs to be done. She did develop a little rash ten days after having it but apart from that she was a very brave Little Lady.

Darren has enjoyed more days at home this month but I think we are both looking forward to getting back into a routine which also means being able to get on with some house stuff.

August has been hard and at times quite testing but I think we can say we enjoyed it, and have also learnt how we need to try to tackle the summer holidays next year.