On Friday Ethan’s school showed its support for Children in Need by inviting the children to take part in a non-uniform day. They were given the option of going into school as Superheros if they wished. As Ethan doesn’t really do fancy dress we opted for a Superman top instead. 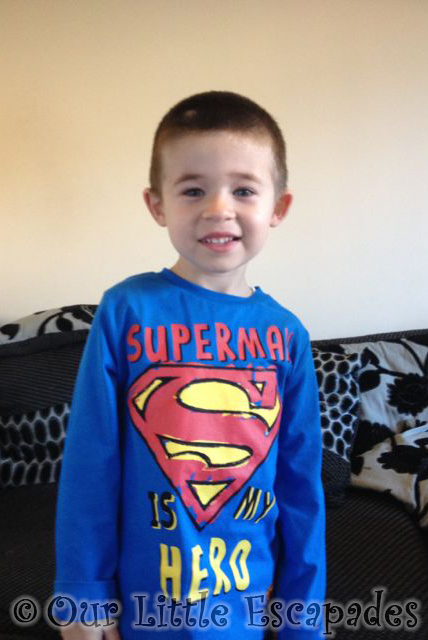 I did wonder how going to school would work. Not only would this be out of routine for Ethan but I was also on my own getting him ready.

I talked to him all morning telling him he was going to school today but he was going to wear his superman top. We got dressed and ready without any problems and happily waited for the school bus.

It was colder on Friday so I decided to put Ethan in his winter coat, a coat that he hasn’t worn to school yet. When the school bus arrived I tried to put the coat on him, he refused to wear it. I decided not to make an issue of it to avoid any potential meltdown.

As we moved into the kitchen Ethan grabbed his school uniform and held his top up. It was as if he was trying to say I should be wearing this today. I kept him moving again telling him that he was wearing his superman top today. Thankfully this tactic kept the meltdowns at bay and I got him into the bus.