On Friday we decided to take Ethan to Colchester Zoo. Partly because he needed to get out of the house and partly because he had been asking to go there. Being that we didn’t have Little E with us we decided to let Ethan pick our route around the zoo. He had energy to burn and we thought it would be a good way to do it.

Being the routine boy he is Ethan actually followed the route that we normally take when we visit the zoo. We visited the Rainbow birds and then the fish. Ethan then asked to see the elephants and from there he wanted to see the Tiger. 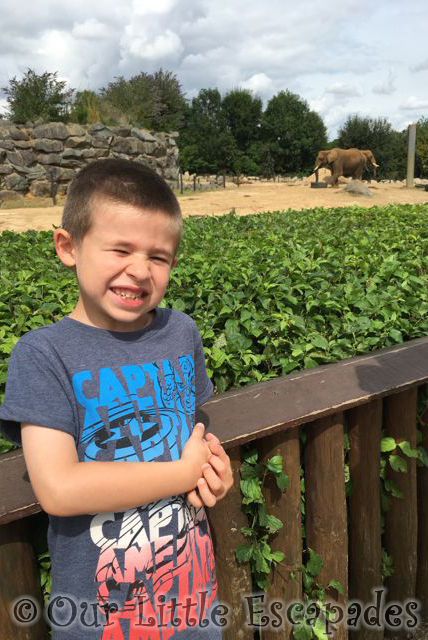 This is where I made a big mistake, instead of turning right at the edge of the elephant area I turned left. Turning left meant that instead of the Tigers being a short walk away we had to make our way around the whole zoo to get to them.

My mistake caused Ethan great distress. Every few minutes he would say “Tigers mummy, tigers”. The panic was clearly building in his voice and we could feel the tension coming. We knew it wouldn’t be long before the tears started and we raced around the zoo as fast as we could trying to find the tigers.

With Ethan’s meltdowns he locks on to something and doesn’t let it go. I can only explain it as going around in an intense circle. In the process of trying to get his point across to me Ethan will pull at me so that he can look at my face. To try to keep the meltdown at bay I made sure I kept one step ahead of him.

During our tiger hunt we actually found another part of the zoo that we have never visited before. This didn’t help with our distress but we finally arrived at the tigers cage. Ethan acted in the way I knew he would. With the tiger seen for all of two seconds Ethan wanted to move onto the next animal.

What we think might have happened to cause the meltdown is that Ethan knew that we had gone the wrong way when we left the elephants. He has a fantastic memory and clearly we don’t. If only Ethan had the words to use to tell us we were going the wrong way!