We had another early start today but thankfully our body clocks were still out of sorts so we were up at 5am. We knew we didn’t have to get the bus as early today as we were so close to Animal Kingdom but we were still one of the first at the bus stops and after a short bus journey we had arrived… 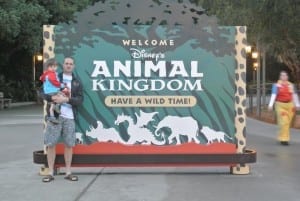 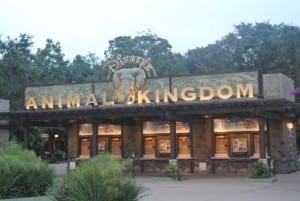 We didn’t have to wait that long before they let us into the park, we were held for quite a long time at the Magic Kingdom. It really is nice being let into the parks early you really do get to see details that you don’t normally notice but I’m ashamed to say we didn’t get and good photos on our walk into Africa as it is quite a walk from the entrance of the park and we were also quite close to our ADR time. I do need to make sure I’m early for times even if its just five minutes, I’m a person that can never walk into a cinema after the adverts have started!
After checking in and parking the buggy (stroller) we waited to be called to see the main man, Donald Duck! 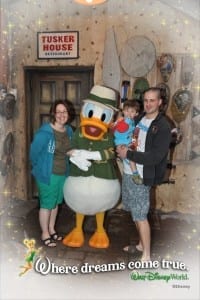 This really was so much more relaxed than our Cinderella experience the morning before. This time we were out in the open and the queue of people waiting for their photo was behind the PhotoPass man not alongside us. As we had the PhotoPass Plus card this photo was given to us in a frame at no extra cost.

We were then seated at our table. Tusker House is a buffet restaurant so you help yourself to what ever you want. Both me and Ethan had Mickey Waffles this morning, Darren had a bit of everything which also included lots of pastries. They also served an amazing fruit juice here, but don’t tell my mum I actually tried it!

The first person to visit us was Mickey Mouse, he gave Ethan back his dummy as it was near the autograph book. You can see from these photos that Ethan still wasn’t sure of Characters coming to see him whilst he ate and would always lean on Darren for reassurance. 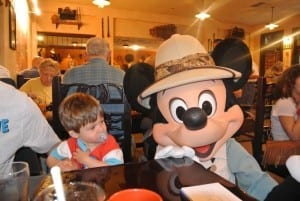 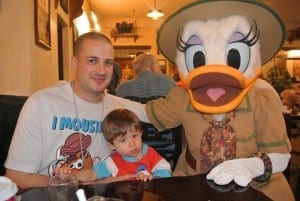 …followed by goofy. No I’m not talking about Darren in this photo! 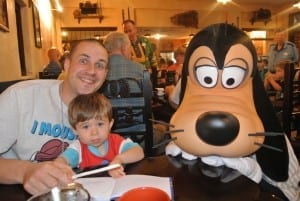 At this restaurant the children and the characters get to do a little parade to music but if we take Ethan out of the highchair its a nightmare to get him back in so through all the meals we thought it was best to leave him in there to not cause any upset. If he was a little bit older I think I would have taken him to join in more but he had fun watching everything that went on.
After paying the bill a $10 tip, Ethan being under three ate for free, we left to explore Africa!