Yesterday morning our little angel took part in her first Christmas Concert. Ironically our little angel was far from it and proved that she is quite the screamer. This resulted in me having to sit on the floor with her which meant I was also in the middle of the performance. Being that this performance was mostly made up of two-year olds I don’t think anyone was expecting too much of them. 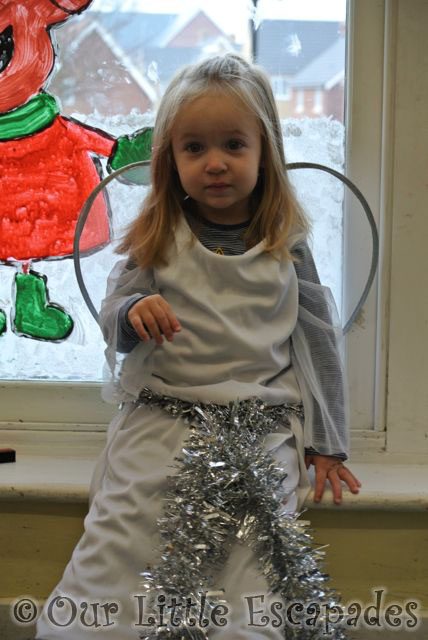 When I arrived it was presently surprised to see Little E was dressed as a Christmas angel. I already expected that she would want to sit on my lap like she did during the harvest festival. I just wasn’t expecting the screams and tears that come with her wanting this to happen. It was clear that joining in with the group was the only thing that was going to calm her.

Little E was full of tears and Peppa Pig was needed but being a bad mummy I let one of the other children get their hands on her. This didn’t happen once but twice! So Little E was the crying child for her very first Christmas performance, and she didn’t even want me to help her and sing along.

Thankfully Little E started to enjoy the concert towards the end when she could jump along to the Sleeping Reindeer song. She was clearly very happy to remove her tinsel belt and put it back on the Christmas tree where it belongs. I’m sure next year, with more understanding it will be a better experience for her.

3 thoughts on “Our Little Angel, Her First Christmas Concert”