So after months of waiting and counting down the days it was time for us to travel to Walt Disney World! We had the tickets and the passports, the cases were packed and the last day of the countdown had been crossed off, it was time to set off on Ethan’s big adventure. 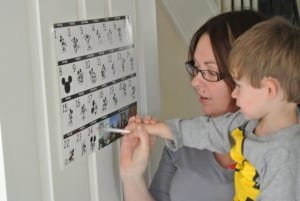 We had decided to stay at the airport hotel the night before our flight so that we didn’t have to deal with the two hour plus drive and have to worry about any traffic problems making us miss our flight. We were up and out of our hotel room by 8am and making our way to the security gates so that we could find some breakfast in the departures lounge.

I hate going through security, I find it very stressful normally without throwing a toddler, buggy and Gruffalo trunki into the mix. Thankfully there was a family entrance for security and there were two other families going through so it wasn’t as stressful as it could have been.

After the less stressful than expected security checks we had to find somewhere for breakfast that would suit us all. I wanted to avoid the famous burger place as I knew we would be eating more than our fill of burgers whilst we were away so we opted for Frankies and Bennys as we could get Weetabix there for Ethan. He still wasn’t eating that well because of the tonsillitis so I wanted to stick to things that he knew. It turned out that he didn’t want to eat anything and just opted for more milk, he had already had a pre-made toddler milk in the hotel room to keep him going.

After eating our breakfast and stopping off at boots to buy even more medical supplies it was time to make our way to our departure gate. Our plane was there ready and waiting and after showing it to Ethan we let him stretch his legs for a bit. 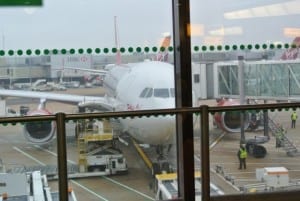 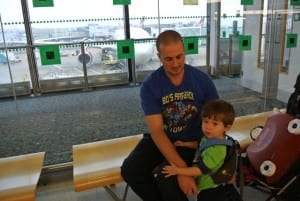 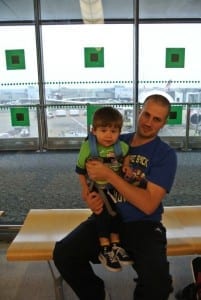 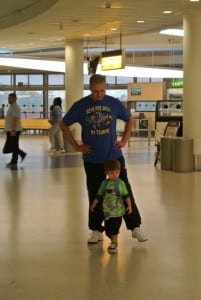 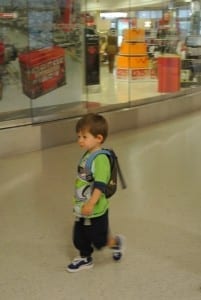 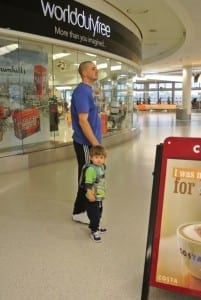 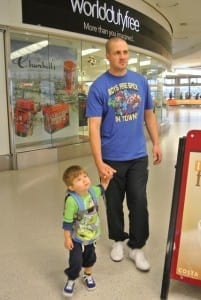 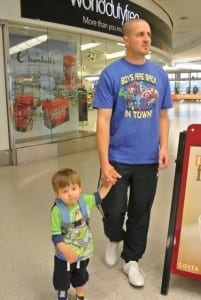 Because of Ethan’s age and the fact that he is possibly autistic we were amongst the first people on the plane. Darren actually was the first person to go through and because of this he was picked for extra security checks, he wasn’t very happy as he had to take his shoes off again! Being the one of the first on the plane worked well because it gave Ethan the chance to have a little walk around the plane and get used to his surroundings. He was allocated his own seat but it had an infant chair in it which is a bit like a car seat and when he was first placed into it he cried his eyes out. Thankfully his leapfrog laptop saved the day and the tears stopped. 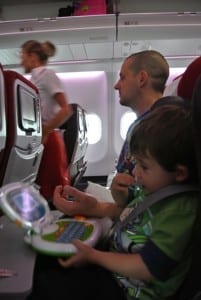 His laptop had to be turned off during take off so his books come out next. 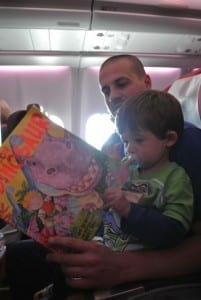 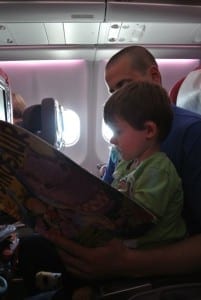 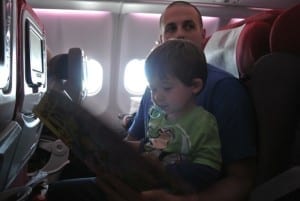 The flight was about nine hours long and Ethan was brilliant. He didn’t eat during the whole flight which did worry us but considering this was a new experience for him we put it down to that. As the flight started to descend we hit some bad turbulence and everyone around us started to get worried, Ethan thought this feeling was the funniest thing ever and was in fits of giggles which helped take everyone’s mind off of the turbulence.
When we landed it was raining, unbeknown to us Sandy was on its way! 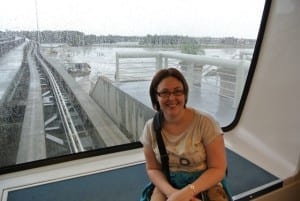 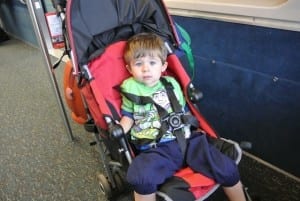 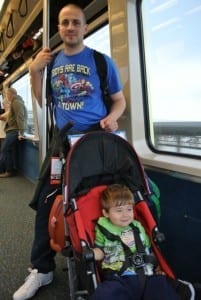 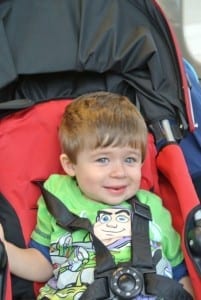 It took three hours for us to get through immigration, collect our luggage and transfer to the hotel so it was gone 6pm when we arrived at Disney’s Animal Kingdom Lodge which was going to be our home for the next two weeks.
Whilst we were checking in Ethan burst into tears, it had been a long day and even though he had slept on the bus all the way from the airport he had had enough. The girls at check-in were brilliant and gave Ethan a Safari Mickey, a first visit badge and a pirates sword in an attempt to cheer him up, it didn’t! We were even upgraded to a savanna view room which we were over the moon about.
So after finding our room, which took us a while and bell services got there before we did, and grabbing some food from the quick service restaurant it was time for us all to call it a day and get some well deserved rest!