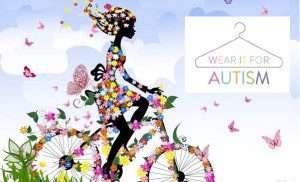 I was very lucky to be invited to attend Wear It For Autism last week in London. I had, very briefly, introduced myself to Anna Kennedy at The Autism Show, London Excel where we saw some amazing performances from her Autism’s Got Talent event. So as you can imagine I was very excited to be attending this event.

Regular readers of my blog will also know that I ran a competition to win two tickets to also attend the event. This meant that I also got to meet, in person for the first time, some lovely fellow bloggers.

The aim of Wear It For Autism was to celebrate and reward the AMAZING parents and relatives of those on the spectrum who do selfless things everyday and yet they are rarely acknowledged for everything they do.

Anna Kennedy says: “The idea behind Wear It For Autism was to spoil those who usually never get a chance to treat – or even think of – themselves. Living with autism can be challenging and extremely demanding, so we wanted to create a special event that will be fun for all involved, as well as raise vital funds to campaign for the rights of those with this disability.”

Each person taking part in the event had been nominated earlier this year by a friend or family member and chosen by the judging panel, which included presenter Gail Porter, actress Adele Silva and the Principal of Pineapple Performing Arts Covent Garden, Maggie Paterson, for their dedication and selflessness.

The evening consisted of a fashion show of the winners, who had had a makeover that day, and entertainment from stars of Autism’s Got Talent, Kitty Brucknell and Pineapple Performing Arts School.

It was a really enjoyable evening and from the perspective of a mother with a child with autism just what I needed. It was so nice to be surrounded by people that know what you have to deal with day to day, the lack of sleep, lack of communication, the fighting for services etc, and knowing that all the feelings that buzz around in your head are totally normal. At times autism can feel like such a lonely place, knowing that your not alone really does make a massive difference.

If you would like to catch professional highlights you can find these on Sky 203 – My Channel tomorrow night, Monday the 16th of September 2013, at 9.30pm.

1 thought on “Wear It For Autism”