I started mother and baby swimming lessons with Little E when Ethan started school. She was nine months old, a little older than some of the other children in her class as they start the lessons from four months old. 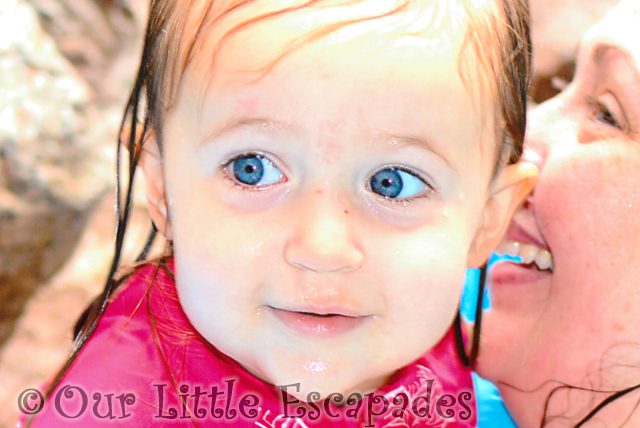 Little E enjoyed the lessons but she didn’t like being placed on her back and she didn’t really move her arms and legs that much. She stayed in the younger class for two terms but this term moved up to the 18 months to two and a half year class. Being a summer baby I have found that it holds her back a little as her teacher feels she cold move up to the next class now but she isn’t the right age. This means we will stay in this class until Christmas.

Over the past few months we have both seen a really big change in Little E’s swimming. She does all the actions to the songs and can now even blow bubbles in the water when asked. She loves to jump into the water and does so before we have finished the song letting her know when it is time to jump. She has got better with being on her back but she doesn’t like the water in her ears so holds her head up when we do this.

Last week I even saw an improvement in Little E learning to hold onto the side of the pool. She wasn’t really doing this that well and would just let go meaning that I had to keep hold of her. Last week she was very eager to do ‘Spider Man’ and made her way easily around the swimming pool without that much help from me.

She even surprised me when it was time to do ‘Jelly on the Plate’. I didn’t know that this was a song that she really knew. We were taking too long to start the song so that she could jump into the water so Little E started to vocalise the song herself.

I have had to learn to let go of my fear of water, which isn’t easy, as part of Little E’s swimming lessons include her swimming under the water. This wasn’t something that we have ever pushed Ethan to do and he doesn’t like water in his face like me. Little E has learnt to love this part of her lesson and even asks to go under the water again and again. We tried to capture this on video during our Center Parcs stay in May.

I love Little E’s confidence in the water and wish I was more like her. Now we just need to work on her independently swimming in the water.

3 thoughts on “Little E is Becoming a Water Baby”