Coming home from Florida, the jet lag and the return to school really upset our little boy. He coped really well with the changes that the holiday brought with it. We had a few meltdowns but overall he enjoyed his holiday and coped really well with all the different hotel rooms, even the unexpected added room at the end of our trip. This was brought about by a cancelled flight and a change of plans that Ethan also had to deal with.

Back at home he kept asking ‘what’s next’ and after such a busy holiday adventure I think that is quite understandable. Who wants to return home after a trip to Disney World?! Ethan was also very distressed with how jet lag was making him feel and he didn’t understand why he couldn’t sleep when it was his bedtime.

Ethan was meant to return to school last Monday but because of our delayed flight time he didn’t return until the Tuesday. This meant he missed circle time where they tell their friends what they have done at the weekend. To help with his transition back into everyday life I sent him into school with the visual social story that I had made him for our trip. It had worked really well on holiday and helped stop potential meltdowns. It really was worth its weight in gold on many occasions. On our return Ethan was looking at it and reading through all of the things we have done.

Ethan returned home from school on Tuesday with the Star of the Day award.  He was awarded it for pointing out what was happening in the photos on the social story I had made. I’m so glad they gave him the time to talk about his Disney Adventure and his return to school has been fairly easy. 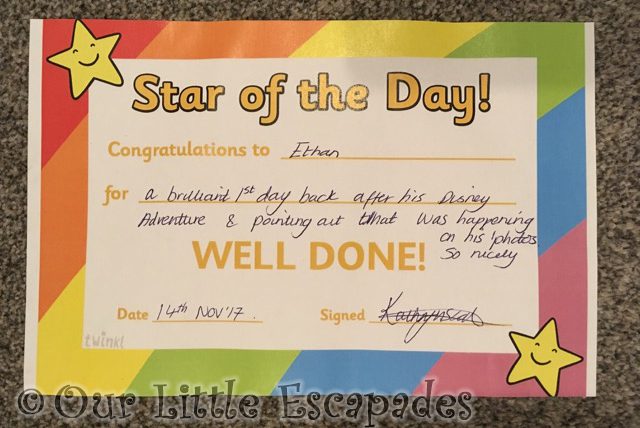