On our third appointment our family support key worker brought with her another game for Ethan to try. This time it was ‘What’s In The Box’. 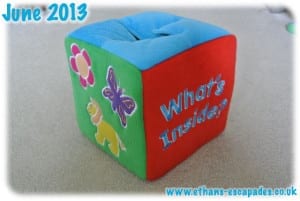 She would sing and sign the following song to the tune Three Blind Mice,

With the song completed Ethan could then pick an item from inside the box to look at for a while. 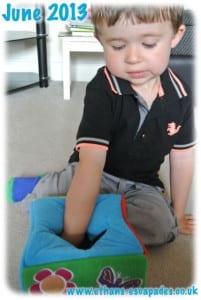 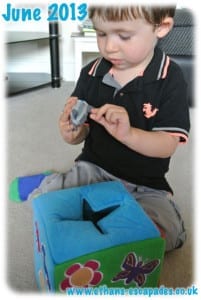 The box contained eight items – a spider, a bear, a frog, a baby bottle, a lion, a plane, a fish and an elephant. 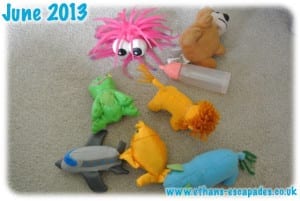 Ethan loved the song, and every time she sang it he got very excited and gave her the biggest, cutest smile. We each took it in turns to pick something out of the box so that Ethan is also learning how to take turns and to wait his turn.

As the game progressed she would drop the words box and see and wait for Ethan to make a sound for the missing words. He did this most of the time, which she said was fantastic.

Ethan was fascinated with the spider. 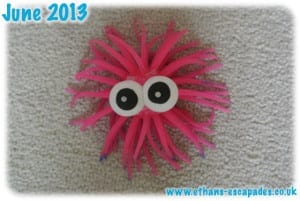 Now if we had given this to him a few years ago he would flinch away from it as he hated the feel, this time he couldn’t get enough of it and didn’t want to stop ‘playing’ with it. This more or less brought an end to his teaching time as we had lost him to the spider.
She had brought with her another peg board game and the snake toy to work with him with his PECS but he didn’t want to know. He ended up ‘playing’ with the spider by using it to press the keys on his mini key board and also running it up and down our legs.

We are both really enjoying her visits and it’s so nice see Ethan using toys that don’t flash, have buttons and make lots of noise.