For any parent a child starting school is a big milestone, one that comes with lots of concerns and sometimes even stress. When you have a child with special needs that worry only doubles.

I feel that we have been talking about Ethan starting school for a very long time. As soon as he was diagnosed with Autism in 2013 we started to look at his schooling options. Both mainstream and special needs schools were visited and there were many discussions. Unfortunately as much as you like to think you will be able to choose where your child goes to school the decision lands in the lap of fate and a panel that have never met your child.

We were given one piece of advise when Ethan was diagnosed, ‘Be prepared to fight!’

Fight I did and fate was on our side, Ethan was given a place at the special needs school of our choice.

Ethan’s peers started school in September 2014 but because our school like to admit the children on the term of their 5th birthday, Ethan finally started school at the beginning of April.

He has now been attending school for two and a half weeks and it has been a shock to all of our systems.

We have had to overcome a few obstacles in this time, the first being the school bus.

The first day of using the bus was heartbreaking, we prepared Ethan as much as we could about school but the bus routes are made up at the last-minute. Darren had to place him on the bus amongst lots of kicking and screaming, not really how you want the first day of school to start.

We also have to work on food, which will always be an ongoing battle. Ethan is able to choose his own meals at school which is a new thing for him but he has been choosing things and then not eating them. To help, I marked up all of the menu choices with what I knew he wouldn’t eat so that they could guide him if needed. Unfortunately Ethan likes to make me out to be a liar and his fail safe pasta meal was refused and he picked and ate a different option!

I love that he is now having this choice but we make sure we feed him a big breakfast and have dinner a little earlier now just in-case he is hungry.

We have seen an increased amount of meltdowns and tears over these past weeks but we were expecting that as he gets used to the change.

All reports suggest that Ethan is very happy in school and it sounds like he is really being put to the test with what he knows. Even though there are a few hurdles to overcome I’m so happy that Ethan has a placement at this school. 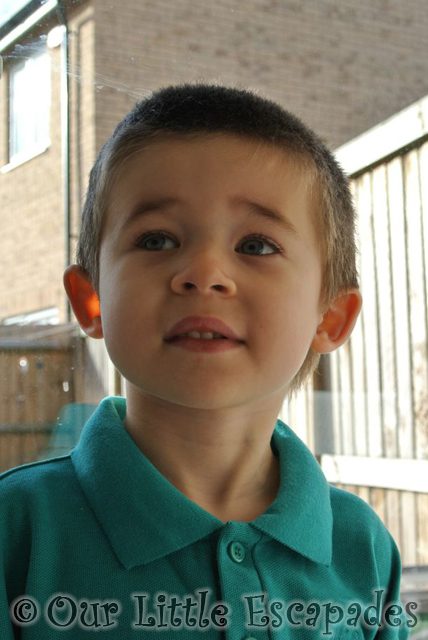 16 thoughts on “First Week’s of School”