Ethan really embraced his Christmas singing in December. It was amazing progress to witness. We have to remind ourselves that Ethan only really started to gain his words last summer. That’s less than eighteen months ago!

I had to look back at my previous blog posts to see the real jump in progress. In April 2015 Ethan surprised me by copying a bee song that caught his eye on the TV. In July 2015 he first sang Happy Birthday, you can hear how he couldn’t quite form the words correctly.

Fast forward to November/December 2016 and Ethan started singing Christmas songs at home. I could make out a song about a clip, clop donkey. There was also a song mentioning that he was born. I asked his teacher about it and at this point Ethan wasn’t joining in with the songs in class. It was amazing that he was trying to sing them to me at home.

Then at the beginning of December Ethan got awarded the Star of the week. He was starting to join in with the singing at school. 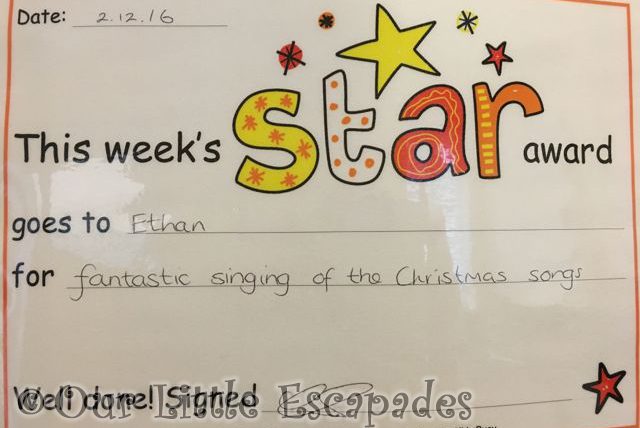 I would love to tell you he embraced the singing at his school Christmas concert. Unfortunately we didn’t get a clear view of him but his teachers said he did. The most important thing to me was that he was happy during the concert and that he enjoyed it. It was clear that he did.

My highlight for December was hearing my children sing Jingle Bells together. I can only assume they both learnt the Christmas songs in their education settings. Little E can actually sing a few Christmas songs, and is still happily singing them. I captured this video of them singing Jingle Bells in the car. It’s not the best video but I wanted to keep this memory, especially since we were told it would be unlikely that Ethan would interact with a sibling.

It’s amazing to see the progress Ethan has made in his communication journey. The fact that he loves to sing with his sister is also amazing. I really hope that they are still happy singing Christmas songs together this year.