For todays swimming lesson Ethan’s instructor thought it would be a good idea to ditch the armbands and just use a swimming woggle to try to get Ethan moving!

Ethan has been having swimming lessons once a week in term time since January and he has yet to kick his legs or move across the pool in anyway on his own. Just to put it in some perspective as he is only two years and five months old, other children that started swimming at the same time have moved up to the next group, we are still in this group and will be for some time. But Ethan can float perfectly with his armbands and I’m quite happy to have him at just over arms reach in the pool as I know he is fine. He can also do some pretty amazing spinning in the water and I think he would quite enjoy synchronised swimming!

Our swimming lessons aren’t just about Ethan learning to swim I also want to give myself confidence in the water as I am not a strong swimmer and nearly drowned in a swimming pool when I was little so I have some issues. So the fact that we have got to where we are at the moment in these lessons is something I’m really proud of. 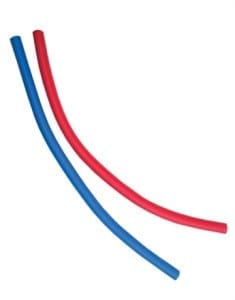 As I decided to embrace this new suggestion I was very brave and left Ethan’s armbands at the side of the pool. The woggle is placed under his arms so that it is supporting his chest and his arms are free to move. This is fine until Ethan puts his arms up and slips straight through the woggle. I then panic and pull him out of the water to find him either coughing up the water he has swallowed or laughing because he thought it was fun. I must add I’m in the swimming pool with him at all times, I don’t think my nerves could take watching him from the sidelines!
Now we are back to me having to get my confidence again and letting go of him in the pool but by the end of todays lesson he was happily spinning in circles and floating with the woggle even if it did give him more of a chance to drink even more of the pool’s water than normal.
I am pleased to report that we did have one kick towards the end of the lesson as the instructor gave him an elephant shaped watering can which he loves. I took it off of him and try to get him to follow me to reach it and he did move for it just a little bit. So now we have worked out with the woggle and the elephant watering can we may finally get him moving forwards in the water and not just spinning!